You read that right… this is no joke.

Copied from scfy.com but you can google “come out of black hole”.  If you see something about Markarian 335, that’s it.  My thoughts at the bottom.

You don’t have to know a whole lot about science to know that black holes typically suck things in, not spew things out. But NASA just spotted something mighty strange at the supermassive black hole Markarian 335. 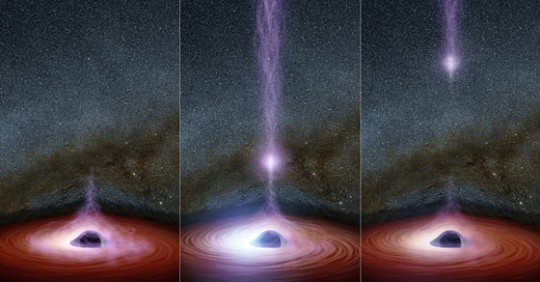 Two of NASA’s space telescopes, including the Nuclear Spectroscopic Telescope Array (NuSTAR), miraculously observed a black hole’s corona “launched” away from the supermassive black hole. Then a massive pulse of X-ray energy spewed out. So, what exactly happened? That’s what scientists are trying to figure out now.

“This is the first time we have been able to link the launching of the corona to a flare,” Dan Wilkins, of Saint Mary’s University, said. “This will help us understand how supermassive black holes power some of the brightest objects in the universe.”

NuSTAR’s principal investigator, Fiona Harrison, noted that the nature of the energetic source is “mysterious,” but added that the ability to actually record the event should provide some clues about the black hole’s size and structure, along with (hopefully) some fresh intel on how black holes function. Luckily for us, this black hole is still 324 million light-years away.

SEE ALSO: Scientists believe they’ve figured out how to travel through a black hole.

So, no matter what strange things it’s doing, it shouldn’t have any effect on our corner of the universe.

Black Holes are so dense and have a gravitational pull strong enough to pull in stars surrounding it to the point that individual starlight merges creating a ring around the darkness of the black hole.  Theories are that black holes bend light!

Which sun was sooo great, that it was able to shoot a flare away from a black hole?  Doesn’t seem possible.  Especially since we just discussed that black holes attack all objects and bends light… ‘naturally’.  I say naturally because it is important to understand what is natural, and what is not.  Typically common sense is all you need.  For example… a falling/shooting star… pretty normal.  If 2 came in together… not so normal, but not extraordinary.  Now if two come in, one following in the path of the other, and they remain exactly the same distance form each other… well that is pretty odd.  Perhaps not ‘natural’.

Humanity has also realized potentially one way to travel through space at speeds of light… or faster would be to aim at the black hole and allow it to accelerate you.  Using the same technology we use currently… we aim for one planet and circle it tightly gaining acceleration using gravity and slingshot to the next planet, except the idea is to fly into the black hole and gain maximum acceleration, and launch back out at maximum speed.  The way I see it… if black holes bend light, and you can fly out of it, you are traveling MUCH faster than the speed of light.

I am sure this is what was witnessed.  Using what we learned…

I hope they are friendly….

Baba Vanga says they will be.